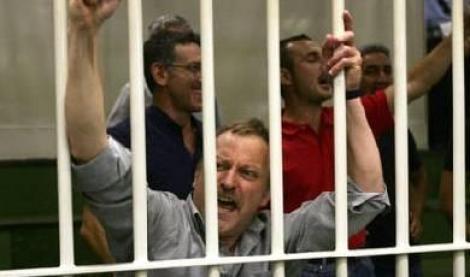 Davanzo had just been asked by a journalist what he made of the recent kneecapping of Roberto Adinolfi, the chief executive of the nuclear power company Ansaldo Nucleare, by two masked men near Genoa on Monday 7 May. There is no established link between the men on trial, arrested in 2007, and the perpetrators, who define themselves as anarchists. The hearing was taking place after the Cassazione court overturned the previous sentence.

Another defendant, Claudio Latino, said: “Violence [is] inevitable and strategically necessary. We don’t love violence, or have a romantic idea of it, but it is inevitable. No group of dominators has ever relinquished power peacefully”. He concluded, his voice quivering with emotion: “Either communism or destruction. Death to imperialism and freedom to the people”.

The defendants have “politically refused” their lawyers.

There were quite a few young radical left sympathisers in court who applauded such slogans. Some of them pulled off their black sweaters to reveal white T-shirts with red letters spelling out the word “solidarity”. Just before the judge had them expelled, they demanded the freeing of the prisoners, raising their clenched fists.

However, it is worth stressing that this group call themselves Partito Comunista Politico-Militare (Political-Military Communist party). Calling them “New Red Brigades” is more of a journalistic cliche, which gives the phenomenon an overdramatic tone: as if, at any moment, the whole country could be plunged back into darkness. The Brigate Rosse was absorbed by pop culture long ago . Didn’t Joe Strummer, after all, wear their T-shirt back in 1977?

Italy is going through a volatile moment. The severe debt crisis, growing unemployment and recession serve as a background (or, more likely, as a direct cause) to a string of confrontational events: a clash between protesters and police over the highly controversial plans for a high-speed rail network (known as TAV) between Italy and France; a chain of suicides of a number of entrepreneurs whose enterprises fell victim to the economic storm; or the series of attacks on the offices of Equitalia, a tax collection agency. And now the bomb attack in Brindisi that claimed the life of a teenage student last Saturday, even if several investigators are now regarding it as the act of a “lone wolf”. All of this not long after the Italian public emphasised its disinterest in politics by giving Berlusconi the longest office mandate in its history.

In the 70s, the Red Brigade attempted an “attack at the heart of the state”, to quote a famous line from one of their manifestos. An attack that took the shape of countless actions: robberies, kidnappings, the execution of company managers, judges, trade unionist leaders, politicians, even journalists. The apex was the notorious kidnapping, and later killing, of the Christian Democratic leader and then prime minister Aldo Moro in 1978. In the 1990s and at the start of the new millennium, there were further attacks, claiming the lives of government advisers who wanted to reform the labour market. But Mario Monti’s Italy is not Moro’s: unlike 30 years ago, when the workers’ movement and the communist trade unions offered fertile ground for revolutionary recruits, today it is the existence of unionism itself that is at stake. Neither does the powerful Communist party exist any more, which the terrorists were trying to outflank. And the sensationalist portrayal of the phenomenon in the Italian media has had a negative effect in more ways than one: on the one hand it gives the group’s activities an overwhelming psychological impact; on the other, it gives the authorities an excellent excuse to turn the screw on personal liberties by maximising social control and neutralising dissent. Let’s not forget what happened in July 2001 at the G8 meeting in Genoa: a savage and brutal repression of protest by the police, defined by Amnesty International as “the most serious suspension of democratic rights in a western country after the second world war”. Such panic-mongering about the return of political terrorism in Italy seems, well, politically terroristic.